During the blockchain boom of late 2017, companies clambered to tear their way into the blockchain sphere. Crypto was hot, and everyone wanted a piece of it, no matter how small. A number of firms even went so far as to simply add the word “blockchain” onto their names without any substantive reasoning (take, for example, Long Island Iced Tea, which attempted to hastily rebrand itself as “Long Blockchain Corp.”)

Now, the opposite seems to be happening.

This week, Israel-based blockchain startup Colu, a company that is working to build local economies and foster relationships between communities and businesses, became the latest player in the blockchain space to make the decision to eliminate blockchain and cryptocurrency from its business plan entirely, citing “regulatory and technical challenges.”

Usually, these kinds of announcements come with a host of ugly details–abandoned blockchain projects often involve massive layoffs and the loss of millions of dollars.

However, Colu claims to be planning to continue its work without any major disruptions to its business plan–according to the announcement of the decision to withdraw from blockchain, Colu will simply re-focus its efforts on “growing municipal partnerships.”

Colu is also continuing on with the launch of two community-centered coins, in Belfast and Tel Aviv, and is working to fundraise with NGOs to further strengthen communities. However, per the announcement, “neither scheme is currently based on blockchain technology.” Colu Group also claims to be “in talks” with a number of other municipalities across the world to start similar projects.

The decision also came with the announcement that Colu DLT, the Gibraltar based subsidiary company of the Colu Group will become “one of the first companies to voluntarily offer to purchase the entirety of tokens sold during an ICO, as blockchain project concludes.”

“The company will now look to acquire the entirety of tokens as issued during the ICO crowd sale period or purchased on the secondary market, amounting to approximately 54 million tokens,” the announcement explains, adding that a dedicated website will be launched to facilitate the buyback.

While buybacks are a common practice among blockchain companies that are looking to increase scarcity on their cryptocurrency Dan Ariely, professor of behavioral economics at Duke University, told Crowdfund Insider that Colu’s reasoning for the complete buyback is unique: “Colu DLT’s decision to purchase CLN tokens appears unprecedented in the industry.”

Ariely pointed in particular to the fact that Colu’s decision seems to have been ultimately motivated by its mission: “The Colu Group is focused on fostering relations between municipalities, local businesses, residents, and other city stakeholders. These relationships rely on the very same kind of trust and consideration, which is now being shown towards CLN token holders,” he explained.

“Such acts of giving up profits for the benefits of customers, partners, and investors are crucial to this tech sector if we want it to continue to evolve and grow.” 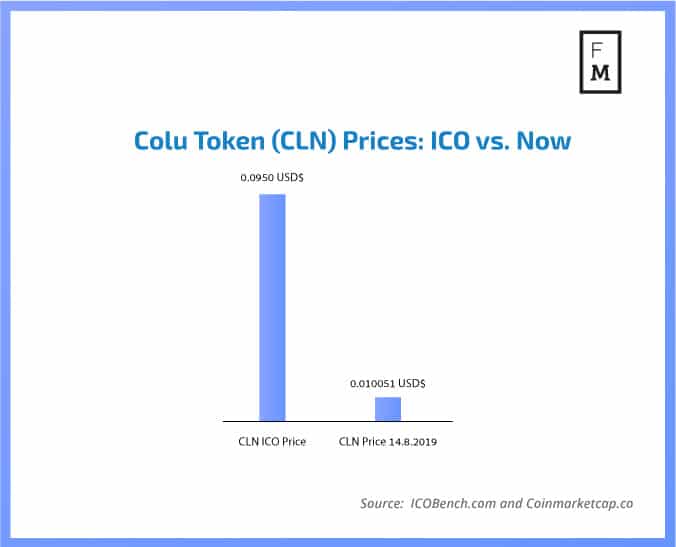 However, Bernstein, who owns a small amount of CLN himself (purchased on bancor.cotrader.com prior to its delisting after the announcement), pointed out that “there is no restriction on who can buy it and sell it back for the ICO price, they say, without limit per person.”

“This means that arbitrage should make the [current] price get close to the ICO price as the time of refund approaches.depending on confidence that the refund will happen, and the time value of holding CLN compared to other things (Bitcoin, Compound, etc).”

In other words, “once the refund is clearly happening, the price may move up faster.”

However, if the refund does not take place, the PR that Colu released regarding the buyback “may be considered price manipulation.” This is because the announcement “[could imply that] the price should move up to 1/8600ETH [its ICO price] by claiming there will be a certain confirmed buyer–Colu–at that price.”

Finance Magnates reached out to Colu regarding their token buyback, but the company had not responded at press time.

Digipulse made a similar decision one year ago

Colu’s decision to exit the blockchain arena seems to have much in common with a similar decision made by Latvian startup Digipulse almost exactly a year ago.

In the first week of August 2018, Digipulse COE Normund Kvilis explained in a blog post that the company would be “de-tokenizing” itself, and that DGPT tokens could be exchanged for a share in the company. DGPT tokens were officially unlisted from cryptocurrency exchanges on December 15, 2018.

Although Digipulse’s reasoning behind the abandonment of its blockchain initiatives is slightly from Colu’s, both decisions were allegedly made on the basis of keeping to a set of pre-established values. Indeed, Digipulse’s decision was reportedly made because the company was trying to keep in line with its mission of “[creating] value with our service, rather than token price speculation.”

“For all its advantages,” Kvilis explained, “Digipulse token value fluctuates based solely on speculation, a process that doesn’t support a sustainable business development,” adding that “out of the 320 service sign-ups we’ve had until July 25th, only two people have actually allocated tokens to the service, meaning that only two people have actually used the DGPT token for its main purpose.”

However, unlike Colu (which will continue its operations without using blockchain and cryptocurrency), Digipulse shut down after its decision to depart from blockchain–its social media accounts have disappeared, and its former domain name, DigiPulse.io, is currently for sale.

The continuing phenomena of blockchain abandonment

In any case, the trend of blockchain abandonment is fairly well-established at this point: the first serious signs of blockchain skepticism coming from companies that had been preaching the blockchain gospel first appeared late in the first quarter of 2018.

Several months after the big crypto boom and bust, it was starting to become clear that perhaps blockchain technology and cryptocurrency were not the magic bullet for every problem in every industry.

By March of 2018, several major companies had already shelved their blockchain efforts in what Reuters described as a ‘hype-meets-reality’ phase: Depository Trust & Clearing Corporation (DTCC), BNP Paribas SA (BNPP.PA) and SIX Group. CitiBank dropped its own blockchain plans in March of this year.

Reuters also explained that there were a number of different reasons behind the decision to abandon the initiatives “from costs to industry readiness”–all of which “[underscored] that, for all its potential, blockchain is still in its early days.”

Additionally, there isn’t always a need for blockchain–in fact, certain kinds of systems seem to be better-suited without DLT altogether.

Indeed, Murray Pozmanter, head of clearing agency services at the DTCC, told Reuters that the company’s blockchain project was shelved because its potential end-users believed that a similar system could be created much more cheaply and efficiently using other kinds of technology.

“Basically, it became a solution in search of a problem,” he said.

And indeed, CryptoGeeks CEO Malcolm Cauchi told Finance Magnates last year that although “blockchain is an amazing technology,” perhaps “not everything needs to be built on it.”

“The integrity of data on a public blockchain can be trusted not to change, but that says nothing about whether the data is right in the first place.”

After all, blockchain may not be all its cracked up to be. A 2018 Medium post by Kai Stinchcombe, Cofounder & CEO at True Link, pointed out that while blockchain is often described as ‘trustless’, it isn’t a “futuristic integrity wand” that can wave trust problems away.

Analyst Dan McCrum explained blockchain’s trust issues this way in a piece for the Financial Times: “the integrity of data on a public blockchain can be trusted not to change, but that says nothing about whether the data is right in the first place. For votes, tuna, shipping containers or mango supply chains, a blockchain registry would only be as good or as trustworthy as the people contributing to it.”

The issue of data integrity on blockchain is magnified by another “benefit” of blockchain technology: its immutability. Once a piece of data is on a blockchain, it’s there to stay, unchanged–forever. But if input sources can’t be trusted in the first place–and, let’s face it, they often can’t–then what’s the point?

And let’s not forget the mounting regulatory challenges that blockchain-based companies are continuing to face.

In many parts of the world–most notably, the US–blockchain companies still have serious difficulties finding a bank that will accept them as clients. Regulators in every country are debating over the future of blockchain and crypto, further contributing to the uncertainty of the future.

Whether the reasons be technical or regulatory, though, the trend of withdrawing from blockchain seems likely to continue. In July, market analytics firm Forrester Research published a report alleging that 90 percent of currently active U.S. companies’ blockchain initiatives will ultimately be abandoned.

While the numbers aren’t that high yet, reality could still come crashing down. However, blockchain believers can hang their hopes on the fact that while the quantity of blockchain initiatives may decrease, the quality of the remaining ones will increase.

In 2017, Forrester published an article entitled “Predictions 2018: The Blockchain Revolution Will Have To Wait A Little Longer,” that explained that “those who failed to translate the headlines into reality will write off their investments and give up, while others that have a deep understanding of the technology and its transformational potential in the long run will continue to forge ahead”–and there are plenty who are, indeed, forging ahead.

2% of Bitcoin Addresses Control 80% of Wealth: Research
During each of the last two bull cycles, alts saw a radical and parabolic increase in value. Convince me why this will not play out during the 4th cycle? : CryptoCurrency