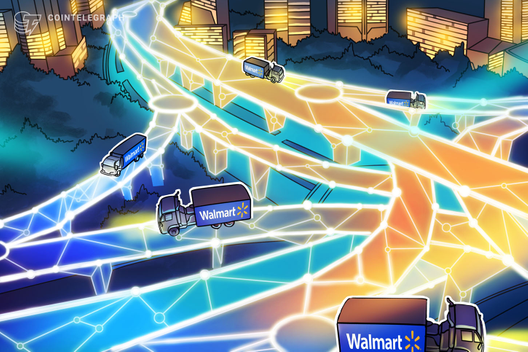 Walmart is no stranger to distributed ledger technology (DLT). Back in October 2016, the multinational food retailer began collaborating with IBM on a blockchain-based system that could identify and flag recalled foods. Since then, it has dived into a number of patents and trials — e.g., tracking meat in China, tracking delivery drones, patenting smart deliveries and tracking live food in the United States.

And in addition to several other U.S. patents and global initiatives, Walmart has recently announced its latest foray into applying blockchain technology. This is its collaboration with the Food and Drug Administration, which — in conjunction with IBM, Merck and KPMG — will see it working on the development of a proof-of-concept blockchain for identifying and tracking prescription drugs.

As with Walmart’s other blockchain-focused experiments, there’s a chance that this latest endeavor won’t progress beyond the trial stage and that the parties involved could move onto other things once the pilot has been completed.

However, given that the pilot has been initiated under the terms of the Drug Supply Chain Security Act (DSCSA) and that it calls for the creation of “an electronic, interoperable system to identify and trace certain prescription drugs” by 2023, there’s every chance that blockchain technology will be involved to some degree in the final system that’s eventually established.

What is it and how will it work?

In February, the Food and Drug Administration (FDA) announced the DSCSA Pilot Project Program and also invited interested companies to submit applications to participate. As the accompanying press release makes clear, the aim of the program is to improve the tracing and authentication of prescription drugs, and to ensure that counterfeit or illegal drugs don’t enter the supply chain. FDA Commissioner Scott Gottlieb said in February:

At the time of the initial announcement, the FDA was open to a variety of proposals involving several new technologies. But it would appear that proposals focusing on blockchain-based technology must have been particularly convincing — because in June, the likes of Merck, Walmart, KPMG and IBM began announcing that they would jointly be working with the FDA on a trial revolving around the use of blockchain.

As pharmaceutical giant Merck stated in a press release, each participant will contribute their respective skills and expertise to the new pilot, which “will create a shared permissioned blockchain network that allows real-time monitoring of products.” Asked why blockchain is likely a better proposition for tracking drug supplies than other new technologies, Merck’s director of global communications, Charles McCurdy, told Cointelegraph:

“A permissioned blockchain network has the potential to create greater transparency, reduce the time needed to track and trace inventory, help determine the integrity of products (such as whether they are kept at the correct temperature), prevent and remove counterfeit drugs, and more.”

KPMG — another participant in the pilot — is equally enthused by the promise shown by blockchain in the context of drug supply chains, and its U.S. blockchain leader, Arun Ghosh, explained to Cointelegraph via the email that DLT will help simplify such chains, which can sometimes operate in a convoluted manner.

“Pharmaceutical supply chains are complex given the numerous entities involved and increased reliance on the use of contracted manufacturers/packagers, re-packagers, and 3rd Party Logistics (3PL) providers. Additionally, joint-collaborations and co-licensing partnerships between Marketing Authorization Holders (MAHs) result in the need to share information and operate from an immutable record. Blockchain is a good fit for tracking the supply of prescription drugs because it provides a private, permissioned network and immutable database. In other words, multiple parties can access the same data in their secured, respective environments (i.e. their ‘node’).”

Moving beyond the actual participants in the DSCSA Pilot Project Program, figures within the blockchain and logistics industry also agree that DLT is an ideal fit for tracking the movement of pharmaceuticals, largely because of its immutability and interoperability. Raja Sharif — the CEO of medical blockchain company FarmaTrust, told Cointelegraph that:

“Blockchain provides the characteristics of immutability and incorruptibility which acts as an important safeguard against tampering with the chain. Which is all important to prevent counterfeits and substandard drugs entering the pharmaceutical supply chain. Another characteristic of blockchain is the ability for it to aggregate data from different systems efficiently.”

Of course, the word “blockchain” is being used in an increasingly wide variety of contexts, often when DLT doesn’t play a central or even a significant role in a system or a platform with which it’s being associated (e.g., in the case of Visa’s new ”blockchain-based” system).

However, in the case of the FDA’s latest pilot, the platform being built will indeed be a (private) blockchain, rather than some other system that tangentially uses only one or two features of blockchain technology. In this case, however, the project does focus on using DLT, as confirmed by McCurdy, who added that the ledger being developed would record such information as “the time and dates a product or products pass through certain checkpoints, temperatures at which they are stored during transport, etc.”

Not only would the new ledger record important info for confirming authenticity and quality, but McCurdy explained that it would do so in accordance with distributed, cryptographically secure principles:

“It would store information such as the above in an immutable format (a permissioned, distributed, networked ‘ledger’) that would guarantee to those who have permission to use the system that the information is connected to the specified product. Specific uses are to track medicines and vaccines through the supply chain from manufacturer to customer.”

Also, according to KPMG’s Ghosh, the pilot will focus specifically on using blockchain tech to make the whole process of tracking pharmaceuticals more efficient and more reliable:

“The pilot is intended to explore how blockchain technology can help reduce the amount of time needed to track a product, make it faster to retrieve more accurate drug distribution information, increase accuracy of information shared among network members and prevent illegitimate products from entering the supply chain.  Location information, in the form of a Global Location Number (GLN), the serialized product identifier, and the event (for example, shipping, receiving, dispensing, destroying) would be stored on the blockchain and viewable based on permission.”

As a concrete example, the pilot would involve newly manufactured drugs being given registration numbers and recorded on the blockchain. From there, they would be shipped to distributors and retailers, and at each point in the supply chain, all movement would be registered on the ledger, while receivers of the drugs would be able to check the incoming drugs against records kept on the distributed database.

As Sharif explained, such a system would make it very hard to surreptitiously pass off counterfeit drugs as the real thing:

“Since in the US all new labels need to be registered and in Europe they are issued by the central authorities, it’s going to be difficult for criminals to infiltrate the pharmaceutical supply chain. Not only that, but if two unique labels are found in the system then automatic alerts will go to the designated authorities or personnel. A further protection is that if a particular batch or label should be in Sweden but appears in Canada, for instance, then this will also be suspicious.”

In fact, things don’t stop there, because not only would counterfeiters have to duplicate the packaging and registered info of legitimate drugs, but they would need to gain access to the permissioned ledger in order to do this. On top of that, they would also have to take the legitimate drugs out of the supply chain, because, as Sharif warned, the existence of drugs with duplicate info would likely be noticed by those with access to the ledger.

In the context of drug supply chains, the potential shown by blockchain technology is evidently large. That said, there’s no guarantee that anything permanent will come out of the FDA-led pilot. because, as McCurdy informed Cointelegraph, the blockchain-focused project is only one of 20 that the FDA has greenlighted as part of the Drug Supply Chain Security Act program. There is, then, a chance that the FDA ends up favoring a pilot that doesn’t harness blockchain technology in any appreciable way.

Indeed, as the FDA explained to Cointelegraph, it has been — and continues to be — resolutely open to other technological means of tracking the supply of prescription medicines, including those that don’t make any use of blockchain. FDA spokesperson clarified that:

“The FDA is actively exploring all potential technologies that will help supply chain trading partners trace drugs as they move through the supply chain, enhancing the agency’s ability to help protect consumers from exposure to drugs that may be counterfeit, stolen, contaminated or otherwise harmful. Blockchain is one of many technologies that is being researched for product tracing and verification. FDA is open to considering all viable technologies and methods through the DSCSA Pilot Project Program.”

Nonetheless, it’s worth pointing out that the Drug Supply Chain Security Act necessitates that the FDA implements an interoperable system for tracing drugs by 2023. Because of this need for interoperability, the final system has to be open to all parties working within the drug supply chain, a requirement that a blockchain-based platform would fulfill very well. This, at least, is what Mersk and KPMG believe:

“The main objective of the project is to explore how blockchain technology can be used to identify, track, and trace prescription medicines and vaccines as they enter and move throughout the U.S. supply chain.”

Ghosh is also hopeful that the new pilot will demonstrate the power of blockchain, because while he accepts that the trial will be relatively small in scale, he also affirms that DLT is just the thing the pharmaceutical industry has been waiting for:

“In this case, creating interoperability within the pharmaceutical supply chain is a challenge where blockchain is extremely well-suited. However, like any emerging technology, we must start with what I call ‘controlled explosions,’ or small projects with a limited blast radius that allow us to measure and test the real business impact before scaling.”

In other words, even if there’s no guarantee that the FDA won’t end up going with a nonblockchain-based system, the early signs indicate that the platform being developed by IBM, Walmart, KPMG and Merck has a good chance of satisfying the criteria the FDA is likely to employ in choosing its winning candidate. And the fact that such names have signed on to the new pilot would suggest that they really believe in its potential.