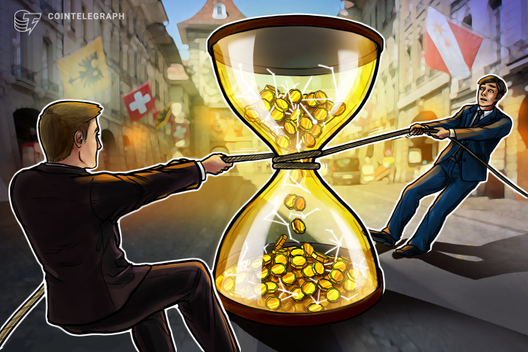 The government of cryptocurrency-friendly Switzerland has shot down the idea of issuing a digital Swiss franc, for now.

According to a Dec. 13 press release published on the Federal Council’s website, the Federal Council approved a report exploring the opportunities and risks of issuing a digital form of the country’s national currency, the franc.

“Universally accessible central bank digital currency would bring no additional benefits for Switzerland at present. Instead, it would give rise to new risks, especially with regard to financial stability.”

The Swiss National Bank (SNB) shares the government’s view, arguing that the new risks to monetary policy and financial stability would pose a major challenge. As such, the government only sees the further development of a CBDC to be reasonable were it to be restricted to financial market players, and not accessible to the general public.

“A ‘wholesale token’ issued by the SNB could possibly help to enhance efficiency in the trading, settlement and management of securities,” the announcement reads. The Federal Council and the SNB will ostensibly continue monitoring developments in the CBDC sector.

“I think that the recent announcement is still in line with Switzerland’s crypto-friendly approach. I personally don‘t see that many real advantages of an electronic Swiss franc and as a cryptocurrency entrepreneur, I rather see a regulatory framework which enables progress for real decentralized cryptocurrencies like Bitcoin. The developments in this field will have a far bigger impact than central bank-backed stable coins.”

In October, the Federal Council noted that, while the mountainous European country is generally seen as very crypto-friendly and “open to innovative approaches in the financial market,” it remains committed to addressing the risks related to stablecoins and cryptocurrencies.

That same month, the SNB and Bank for International Settlements (BIS) signed an agreement to cooperate on the BIS Innovation Hub Centre in Switzerland. The center is set to initially focus on two research projects — integration of CBDCs into a distributed ledger technology infrastructure, and analysis of the rising requirements for tracking fast-paced electronic markets by central banks.