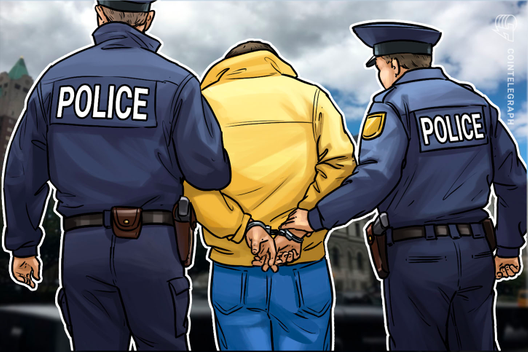 Authorities in the United States have arrested two individuals who allegedly threatened to destroy a startup crypto company if they were not paid millions of dollars in cryptocurrency.

On Sept. 18, the U.S. Attorney’s Office for the Eastern District of New York, together with the FBI, announced the arrest of Steven Nerayoff and Michael Hlady. Both individuals were charged with extortion of a cryptocurrency startup and have already made their initial appearance in federal court.

Nerayoff, a lawyer himself, was purportedly hired to assist in a Seattle-based company’s initial coin offering (ICO) and brought in the second defendant as his “operations guy.”

Soon after, both defendants allegedly started showing signs of extortion when they demanded millions of dollars in raised capital and company tokens, despite not offering any additional services. Both men purportedly threatened the company’s executive with sabotage of the ICO and total destruction of the startup. U.S. Attorney Richard P. Donoghue said:

“As alleged, Nerayoff and Hlady carried out an old-fashioned shakedown, to be paid off with 21st century cryptocurrency. This Office and our partners at the FBI are committed to protecting businesses from extortion, whether the demands are for U.S. dollars or cryptocurrency.”

FBI Assistant Director-in-Charge William Sweeney said that this is a classic, age-old extortion scheme with a modern day twist, adding:

“Imposing forceful demands on a company for personal gain is risky business, whether one’s preference is to be paid off with cryptocurrency or cold hard cash. The FBI will continue to seek justice for victims who businesses have been targeted by these types of scams.”

Cointelegraph reported in August that, according to a report by Symantec, cybercriminals managed to earn $1.2 million in Bitcoin (BTC) through sextortion and bomb threat scams in 12 months.

Per the report, in May 2019, 63 wallets associated with such scams received a total of 12.8 BTC, worth $106,240 at the time. Symantec estimated the yearly income of $1.2 million by taking the example of May as a likely monthly average.